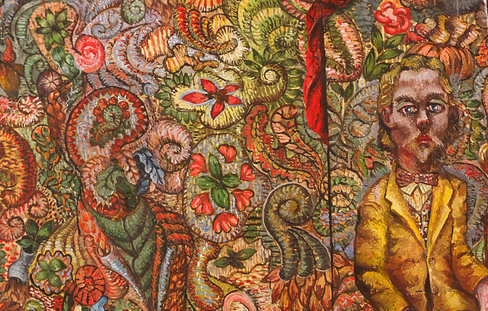 The pattern making Steven employed in this painting was to become the style of his expression for the next couple of years. I have included an extract from October’s 2020 calendar entry, as I touched upon the background to the painting then.

‘Steven had travelled north to Elgin by train and spent the day sketching portraits with John, both men admitting some trepidation to the meeting and the task in hand. On his return Steven felt that a straight forward portrait just did not fit with the character of the man and wanted to go deeper to the roots that John was proud of, hence the left field idea of portraying him only through pattern, ‘Paisleycus Byrnicus Virus invading Mr Gray’.

As an aside, to set the record straight, the Mr Gray of the title was not a reference to Alasdair Gray or Lanark’s skin condition of ‘dragon hide’, but rather alludes to the Picture of Dorian Gray by Oscar Wilde. He became increasingly intrigued by the possibilities that working with pattern offered him and it became a rich vein in his work’

The painting is loosely based on ‘Las Meninas’ painted in 1656 by Diego Velazquez.

As both artist and supremo of the composition  Steven dominates the centre of the canvas, with the figure of John standing to his left, with the dwarf front right from the Velazquez painting, while top right references the figure in the doorway from Las Meninas. The little dog front bottom is a direct reference to Pablo Picasso’s 1957 in depth study of the painting, so it is a Picasso dog rather than a Velazquez one.

Dazzling in form, colour and composition this painting is a triumph of imagination and skill.