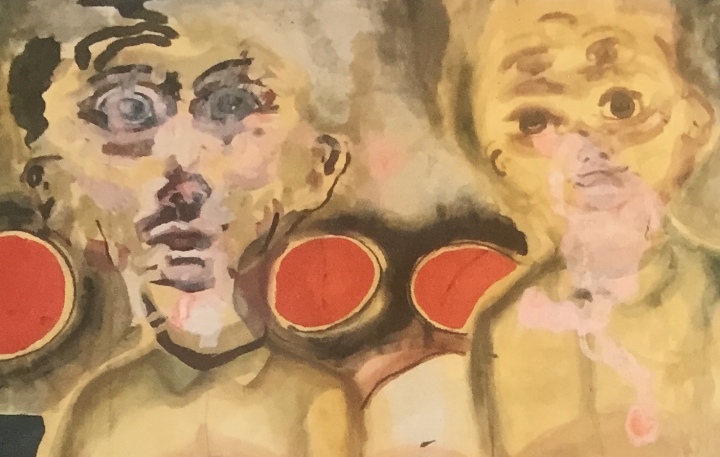 The image here is taken from a tragic real life event that Steven happened unwittingly to be party to and which left a scarring memory.

It was early on a sunny Sunday morning in New York when after a debate around him going to his studio, with me saying he should take a Sunday off as family time / day of rest but ending with us compromising on him going for a few hours and planning to be back by early afternoon.

Steven set off for his studio in Bed-Stuy (Bedford-Stuyvesant). He had one change to make on his subway journey from our loft in lower Manhattan to the Brooklyn borough.

As he got off his first train and was descending down to a lower platform there was a large crowd cramming onto the platform and all looking intently at something happening on the tracks. He could hear someone screaming and word began to filter through the crowd that there had been a ‘jumper’.

Paramedics and police were there dealing with the situation and Steven feeling he’d no wish to be party to whatever tragedy was unfolding took himself back up the stairs to then cross over the platform, so he could descend on the other side, having chosen to give up on the idea of the studio and come home instead.

Unbeknownst to him just as he was about to descend a decision had obviously been taken by the paramedics that the platform was too crowded to get through with the stretcher and they had crossed the platform to ascend on the very staircase that Steven was descending. He said it was one of the singularly most horrific sights, as the stretcher angled up came into full view, it carried a young black man screaming in agony and waiving two bloody stumps in the air where his legs (severed from the knee down) had been.

In all the tragedy he was not unaware of the irony of by dint of being the only person who apparently wanted to avoid the scene being the only one to get a grandstand view of this young mans horrific injuries and the subsequent sorrow he felt for a fellow human being brought so low that a suicide attempt had been the only way out.

This makes you look at the image in a whole different light.