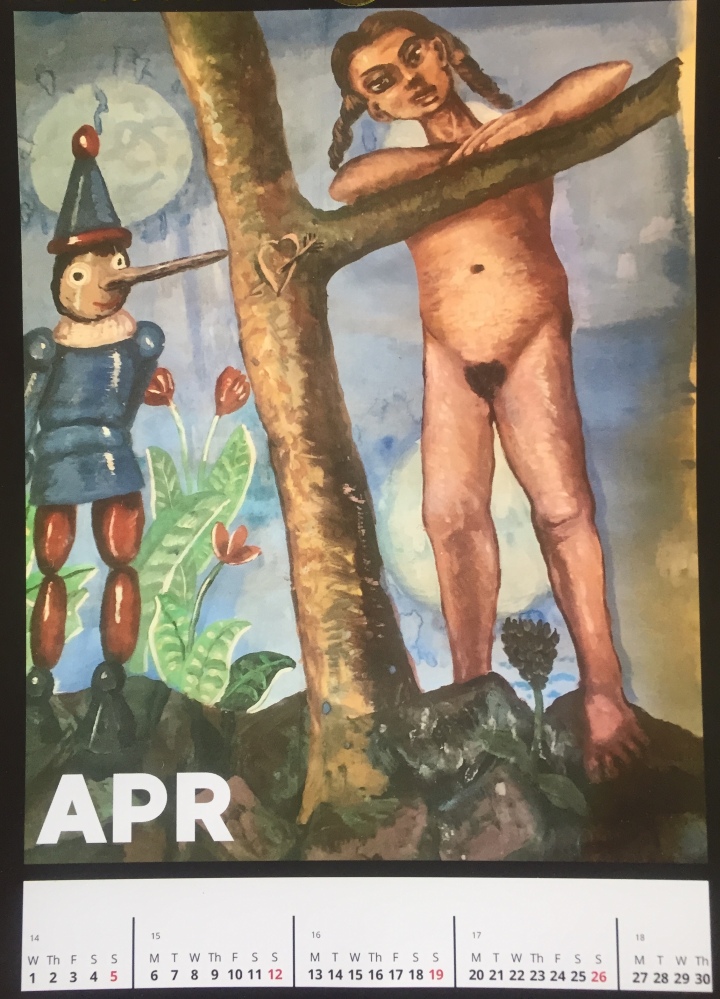 Our Steven Campbell Trust calendar April image, draws on what was to become a leitmotif for Steven for over a decade: Pinocchio.

Our family has for many, many years spent our summers in Italy with the majority of our time spent between Tuscany and Umbria around Cortona and Lago Trasimeno.

We first started going when our 3 children were small and it was then that we discovered a theme park on the outskirts of Perugia called Citta Della Domenica or Sunday City. I use the term theme park very loosely, as the park was set up in the 60’s and has changed little since then. It is part nature reserve, part sculpture-park but it does indeed have a theme and that theme is Pinocchio, not the Disneyland cartoon character but the much darker original story by Carlo Collodi.

Dotted around the park are various scenes from the story, some funny but others quite frightening, especially for young kids.

One in particular which struck Steven, was of Pinocchio sitting very dismally in a dark cave-like prison shackled to the wall. He did in fact make a painting of it called Pinocchio in Chains.

The Pinocchio here however is modelled on the souvenirs that crowd all the shops in the surrounding area from Lucca to Siena. They come as jointed figures, as in the painting, ranging in size from key rings to actual puppets, some even come as comically collapsible figures when you press the bottom of their stand.

Steven has chosen, on this occasion, to combine him with a female protagonist, a loosely based Heidi type figure, a pubescent girl/woman straddling both those worlds while embracing the tree that we could conjecture had been the one used to make our hero.

Steven had since the 80’s, with his Painting Ding Dong in the National Gallery of Scotland, drawn upon this female figure complete with her childlike braids, juxtaposed with her womanly strength or self knowledge.

Further Pinocchio images and information can be found in articles relating to Steven’s 1993 exhibition at the Talbot Rice Centre in Edinburgh, called Pinocchio’s Present.