Work in progress, on an easel that was kindly given to me by ISCP resident John Aslanidis

I’ve been spending a lot of time painting in the studio recently, and I’ve also been corresponding back-and-forth with figure model Zeke. He’s come up with a list of free-associated words that will possibly be used either to title the final pieces, or as a starting point from which meaning can form within the work.

If you’d like to see some images from recent photo sessions, please take a look at my previous post: https://clairepatersonartist.wordpress.com/2016/11/30/collaborative-myth-making-new-york/

Here are other events / highlights from this last week or so:

This evening, I went to an event at the ISCP called ‘One artist, one work’, where one resident discusses their practice in their studio space. This time it was hosted by the artist Thomas Tronel-Gauthier from France, who talked about a new body of work entitled ‘Water & Words’.

It was interesting hearing about the process behind Tom’s recent work, which involves him using Chinese ink to print words on paper, before pouring water over the piece to spread the ink and dilute/ obscure the words so that the meaning is clouded or lost.

Terike Haapoja discussing her work and interest in Nonhuman rights

After this, I attended a lecture in the ISCP held by Steven Wise, a prominent animal rights scholar and founder of the Nonhuman Rights Project, and artist Terike Haapoja, who’s currently showing in the Animal Mirror exhibition at the ISCP.

Animal Mirror exhibit, currently on at the ISCP

There were some fascinating topics under discussion, such as whether animals (hopefully starting with chimpanzees) should be granted legal rights and personhood. It was really engaging hearing lawyer Steven Wise discuss the practical ways non-human rights might finally be implemented under current law systems.

Today I had a meeting in my studio with Adam Kleinman – writer, editor, curator, lecturer, sometime performer, and former dOCUMENTA Agent for Public Programming.

We discussed my new paintings, and Adam put forward some suggestions as to how I might develop my current myth-making project . Due to the elements of spontaneity and chance in my work (along with its ritualistic underpinnings, and elements inspired by archaic symbolism & the occult), Adam suggested that I take pieces that I produce collaboratively with models to a tarot reader, and have the fortune-teller do readings of the painted-images themselves – with the random card layouts and symbolic results from this experiment either directly or indirectly incorporated into the title and perceived meaning of the work.

He also thought that the myth-making process and resultant images might work well in a book or publication, and encouraged me to look into this avenue of development as well. He offered some advice on what shows and museums to go to, recommending I visit the Rubin Museum at some point – a NY gallery that focuses on Tibetan art and symbolism.

Later on, as I was thinking about Adam’s Tarot reading suggestion, I remembered that I have a copy of the I-Ching (or Book of Changes) back home in Scotland, and that I could possibly construct random and spontaneous meaning using the I-Ching divination technique of throwing coins.

Just as I was mulling this over, I received an email from New Mexico artist Elizabeth Kay. Liz has also been looking at the results of my recent photo sessions, and along with many other great suggestions and observations, has started to speculate about the idea of NYC itself somehow making its presence known in the new work:

‘Claire, I woke up thinking this morning about the spirit of place in your works. The Scottish works are so imbued with a dark, mysterious, somewhat dangerous, twilight atmosphere, as if the old Celtic spirits were swirling about. I think, too, that the fabrics and objects you and your models chose in those works recall the 19th century or earlier. How will the character of NYC itself be part of the new compositions?’

Liz then went on to talk about how this led her to consider Carl Jung’s forward to the I-Ching, in which Jung talks about consulting the I-Ching as if it were a sentient being. She suggested that I do a similar thing with NYC, ‘inviting it into the mix as if it were a person.’

As well as being intrigued by Liz’s ideas, I enjoyed the fact that we’d both followed completely different trains of thought in relation to my work and arrived, bizarrely, at the I-Ching at exactly the same time, without ever having discussed it before! 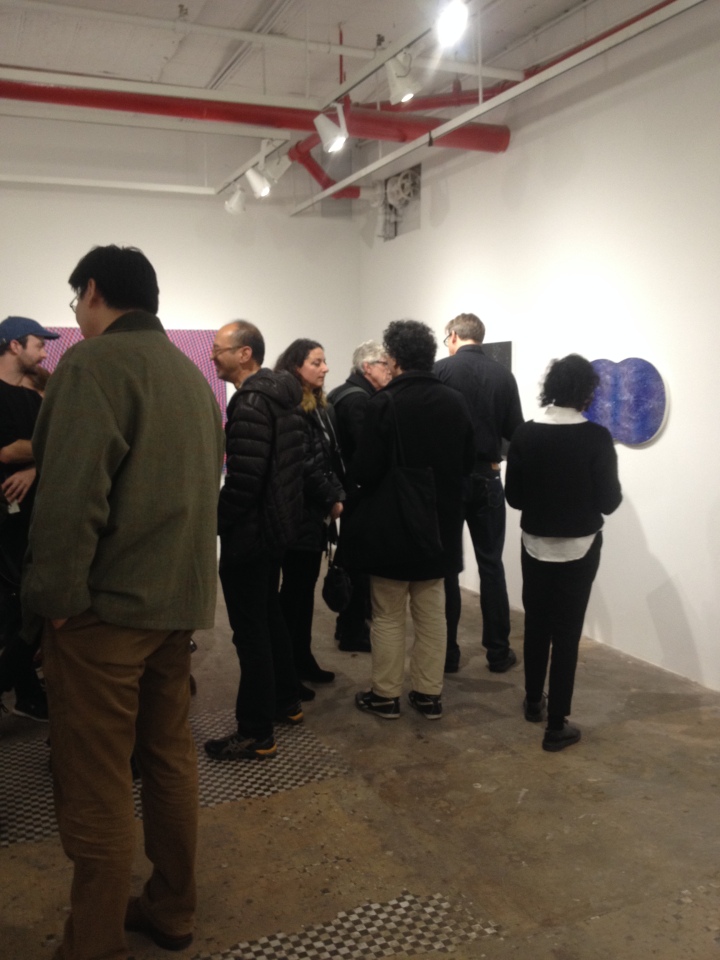 In the evening, I went to an exhibition opening near the studio: Interference at NURTUREart, a group show where the work focuses on the intersection between art & science – the participating artists all sharing an interest in visually representing and interpreting sound-waves, electromagnetism and interference patterns.

Today G & I went to an exhibition at The New School called Push Play, that the critic Alaina Claire Feldman suggested I visit. She’d told me to look specifically at a collaborative piece by the artists Allan McCollum and Matt Mullican – who’ve created their own divination game ‘Your Fate,’ where the roll of multiple dice, and subsequent interpretation of the symbols, help ‘rework one’s worldview.’ (For more info on the ‘Your Fate’ game, see www.allanmccullum.net).

The symbols on the dice come from Mullican’s ‘cosmology of pictograms’ that are the basis of his work, as well as his interest in divination systems.

While at the show, I decided to combine the ideas of the last two critics I’ve spoken to. Holding the image of a painting I’m working on in my mind, I allowed the random roll of Mullican’s dice determine possible interpretations and meanings for the new piece. I’ll discuss in another post whether these ideas actually come to fruition or not!

G and I then had fun interacting with some of the other game-inspired artworks around the exhibition.

In the afternoon, we headed back to G’s apartment so I could see the new work she’s been making for the last week: soft-sculpture dogs made out of fabric, most of them produced in pairs to keep each other company! We then made the most of the good weather and walked G’s real dog, Blue, through Prospect Park.

The week ended in a pretty weird way. There have been movie trailers parked outside G’s apartment for the last little while: the building and surrounding streets being used as a location in a film. I left G’s apartment, and as I was walking down the stairs into the subway, I realised that I was surrounded by Paparazzi, who were crammed into the underground stop, frantically taking pictures. I squeezed past them to wait for my train, and saw that there was a very glamorous woman in a white fur coat sitting inside a subway car, circled by film crew. I asked a photographer who she was (I’m not great at recognising Hollywood stars!), and was told that it was Sandra Bullock.

Just before I got on my own train, a huge fight broke out between two of the Paparazzi, who had a screaming match on the subway stairs, the whole thing almost coming to blows. When I got home, I phoned G to tell her about it, only to find out that Sandra Bullock is her favourite actress – so she’s going to be a lot more interested in the film crews surrounding her apartment from now on!

So there you go – I’ve seen my first NY movie star this week, and witnessed my first Paparazzi brawl… 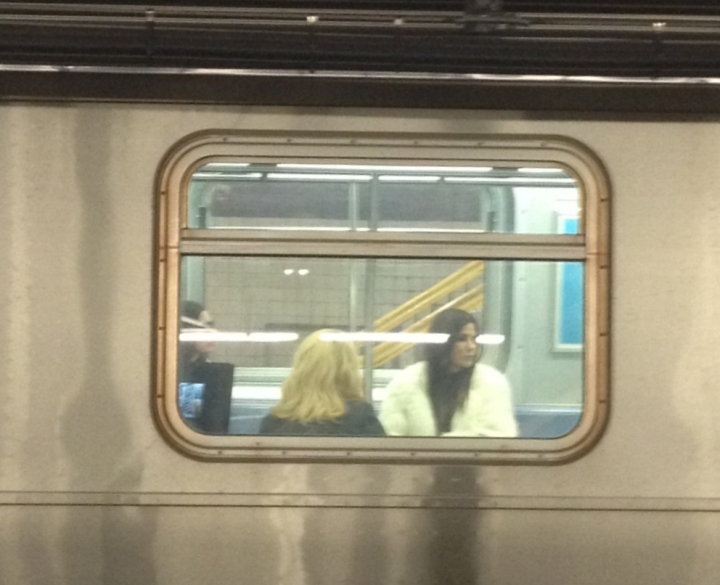