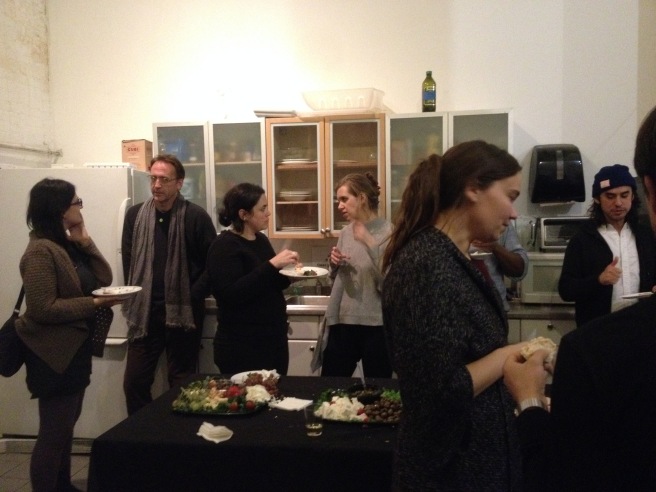 A mixer event was held at the studio today – residents & staff from Socrates Sculpture Park in Queens dropping by to visit us at the ISCP. A great spread of Greek food was put on courtesy of the ISCP, and we all went home very well fed!

Socrates Sculpture Park is an outdoor museum and public park, where artists can ‘create and exhibit sculptures and multimedia installations’. After chatting to residents at the mixer, I’m keen to visit the park, as it sounds like there’s some interesting stuff happening there, even with winter approaching.

Over the last couple of months, Socrates staff member Chris has been constructing a studio from stacked shipping containers in the park, and has invited people from the ISCP to come along and see how the project’s progressing.

Stupidly chose the windiest day of my trip so far to carry canvases from the art store, almost getting blown away a few times in the process. Made it back to the studio in one piece though, and managed to get some undercoats painted. One of the ISCP’s other residents, John, has kindly given me a lot of his paint, as he’ll be going home to Australia soon – so I’ve got plenty to get me started.

This evening I followed advice my flatmates Ash & Giles gave me, and headed out to the Museum of Natural History to see the bizarre Macy’s Parade Balloon Inflation, where all of the vast balloons of cartoon characters that are used on the Macy’s Thanksgiving floats are filled with helium over the course of around 7 hours.

I arrived towards the end of the event, when the balloons were almost full, and saw Ronald McDonald, Charlie Brown, Paddington, Pokemon and lots of other famous characters looking like surreal, bound beasts, trapped under nets and hooked up to helium machines. There was something vaguely sinister about the whole thing, particularly with the addition of the relentlessly cheery festive music blaring over the outdoor PA system. 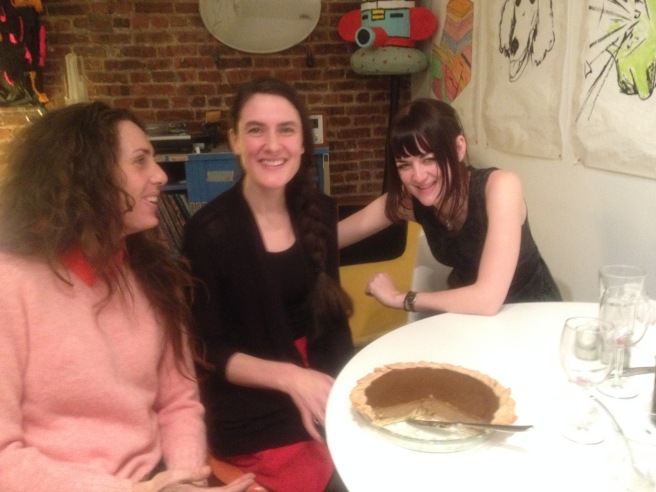 G came along to the studio in the late afternoon to offer me some advice on my blocked-in compositions, and we started Thanksgiving festivities early with some wine there.

Afterwards, we went up the road to my apartment, where Ash and Giles cooked a delicious Thanksgiving meal with a homemade pumpkin pie for dessert.

Leftover pumpkin pie for breakfast, to fuel me through another studio day! Later my friend Sarah popped round to the flat, and we had a fun evening listening to music from Ash and Giles’ huge record collection.

Today G and I went to The Cloisters in uptown Manhattan, walking through Fort Tryon park and taking in views over the Hudson river, the water framed by Autumn foliage.

After having brunch at a restaurant in the park called New Leaf, we wandered through The Cloisters, admiring the courtyards, chapels, ramparts, stained-glass windows, and various architectural features intended to ‘invoke in visitors a sense of the Medieval European Monastic life,’ containing something of the light and atmosphere that I’ve tried to create recently in my myth-making sessions with models.

As G and I both explore similar subject matter in our work, we were in our element viewing the original Medieval reliquaries, statues and tapestries – many of which showed recognisable religious tableaux, whilst others had something altogether stranger going on: a bizarre mishmash of Pagan and Christian symbolism leading to some pretty unusual scenes. This was particularly evident in the surreal & bloody drama unfolding in the Flemish Unicorn Tapestries, where the suffering of a hunted Unicorn is intended to mirror the suffering of Christ.

Ended the week in the studio, getting stuck into painting. In a few days, I’ll be doing my first post about my new work, as well as writing about some of my favourite Steven Campbell paintings – one of which inspired a particular pose produced collaboratively with figure model Celeste.