In the Gutter the smells run across the way. 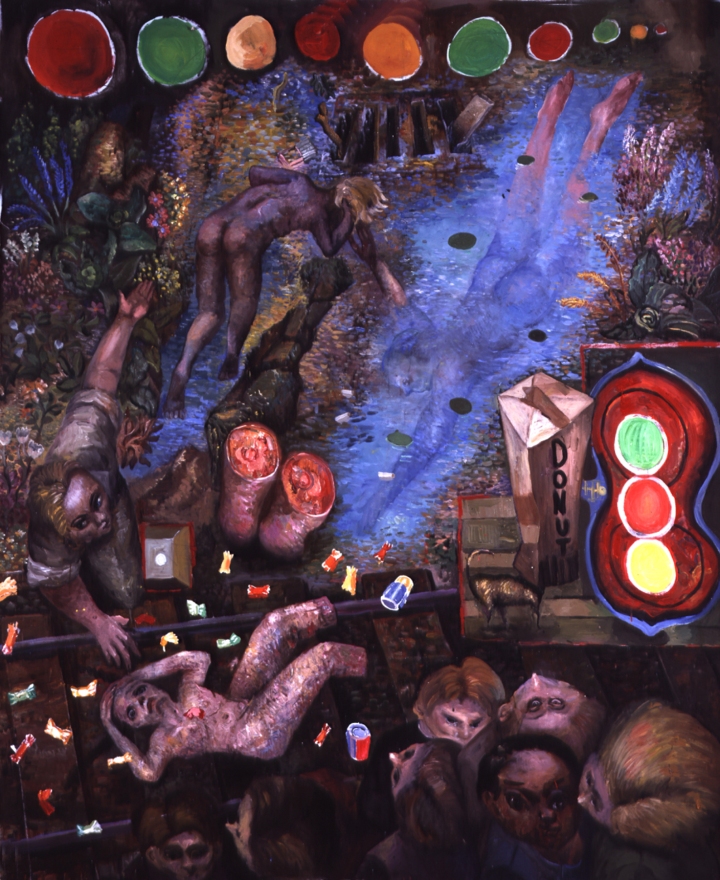 This painting is based on an experience Steven had one Sunday travelling out to his studio in Bed Sty or Bedford Stuyvesant, to give it its full name. He had one change to make on the journey from our loft in Little Italy.

On approaching the platform to continue his journey he found it crowded with people and soon discovered that there had been a suicide attempt (a jumper on the track). Apparently the man was still there with the emergency services so Steven, not wishing to see anything gruesome (unlike the majority of the crowd) went back in the other direction trying to cross to the other platform to return home.

Unfortunately at the same time as Steven was coming down, the paramedics were bringing the injured young black man, who was now screaming and waving two bloody stumps in the air while lying on the stretcher. His legs had been cut off below the knee. So Steven, by trying to avoid being part of the action ended with a ringside seat, which left a very harrowing memory.

So if you look again at the painting you will see the crowds, bottom right, the signal lights, the body with the 2 stumps above it and various bits of detritus floating about.

The donut bag to the right of the picture beside the signal lights has a body of a rat coming out of it and again this comes from an actual memory. This was a different day but Steven has chosen to merge them into the one painting. We were both standing waiting for our local train, the RR, when a donut bag with the back end of a rat sticking out from it came hurtling along the track, the rat had obviously got inside to retrieve a left over piece of donut and had gotten stuck.

This painting is a good example of how Steven would take personal experiences and merge them with imaginative elements to form a cohesive, if somewhat illusive whole.

A still from a movie, where you write the script with your own imagination.